Back in 1994, I was the soprano soloist at the Aldeburgh Festival in the premiere of an amazing, recently discovered piece called Three Chants by the experimental American composer, Ruth Crawford Seeger. At the time, I was completing my MMus at the Academy and looking for something to edit. The experience of performing Three Chants from a photocopy of the microfilm of the hand-written original manuscript found me that piece!

It’s a piece for 12 female voices and soprano and alto solo and the original manuscript was difficult to read and involved far too many page turns, especially in the very quiet central movement. There were several important editorial decisions to make; particularly over the pronunciation of the phonemes that make up the ‘text’. The question of a performing edition became more pressing when Oliver Knussen decided to include Three Chants in his ‘Ruth Crawford Seeger: Portrait’ CD for Deutsche Grammophon.

Spurred on by the success of the piece and its impact in performance, it was almost published by Peters Edition. In the end, however, there were just too many legal obstacles and it never actually got published.

Recently, there’s been renewed interest in Three Chants, and, as I am the sole holder of the performing materials, I feel, since it’s just been International Women’s Day, I should do my bit for the piece, Ruth Crawford Seeger and women composers and make it more available to performers and a wider audience.  I’ve just sent it to California. Wish me and it luck! 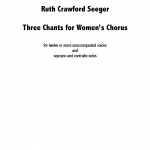 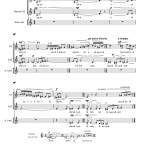 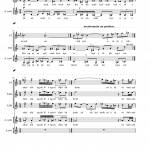 As well as keeping my voice in trim and being involved with some great singing projects along the way – see my website for details! – I’ve been looking after my two children Theo and Caspar.  Whilst doing this, I have found myself keen to share my love of music with as many other children as possible; to try and give back some of the great things I have taken from a life-long involvement in music and to share this with young people who might not find their way to classical music so easily.

As for the singing projects, several recently have been linked to researching how music fitted into various social and cultural scenes.  For example, music from the last gasps of the Vauxhall Pleasure Gardens to Jane Austen’s domestic use of music or Charles Dickens’ love of the stage or the multicultural society in pre-First World War Britain that links back to Elgar and his contemporaries. Music by women composers have also been revisited and there are more concerts linked with this planned for the coming year.  More details on these projects including details of recordings, can be found on this website.

What would the world be like without music – any sort of music?  Much duller and less interesting, certainly. Silence only has its impact if there is a contrast; music is therapeutic when silence is too empty to bear; it unlocks the imagination and drives the emotions in ways little understood; yet it is a given that it will and does. Everyone deserves a chance to sample and savour its mysterious delights.

Music making in a group can also be therapy and it is completely affordable and inclusive.  Being potentially a socially inclusive activity, it can open doors to opportunity. This was an underlying message in David Lammy’s (MP for Tottenham) address to the SJDK congregation and Boys’ choir recently. Lammy had won a scholarship to the King’s School as a chorister at Peterborough Cathedral. He calls it his ‘X Factor’ moment in his book “Out of the Ashes” – it was his ‘opportunity to rise above the canopy that was life back home.’  This opportunity is now available to the boys and girls of the SJDK children’s choirs.

I help young people in music with the formation of the local church, St John the Divine, Kennington’s Boys’ Choir.  I guide and encouraging the boys into thinking that, at least for them, singing is the easiest thing to be good at in the world; even if they struggle elsewhere in life or at school, they are in the choir because they can and want to sing. They don’t need to practise at home, there’s no homework, and they are part of a team; all they need to do is come to one rehearsal a week, open their mouths and sing.  It’s a ready-made social safety net for them.  And they even get to run around and play football from time to time…

The SJDK choirs will make their second visit to Cambridge in July for a residential summer course.  Last year’s visit was a great success.  The children got so much out of their time in Cambridge.  It was the beginning of the process of learning how to be choristers in one of the major bastions of choral singing and having a lot of fun along the way.

‘..Schumann’s rapturous portrait of a woman’s marriage, the cycle Frauenliebe und Leben. Pitt put this across with simplicity and conviction, her husky vibrato a natural throb of passion.’ (Paul Driver, The Sunday Times)